If you live in the Kansas City area, it is likely Copaken Brooks has impacted the office you work in, the malls you shop in, or even the building you live in.

How did we get here? We are a generation of Kansas City’s oldest, continuously operated, locally- and family-owned commercial real estate firm – which did not happen overnight. Herman Copaken pioneered the commercial real estate firm in 1922, and since then the Copaken family and its cohorts have nurtured it into what it is today. Paul Copaken, Herman’s son, and co-founder of Copaken, White & Blitt (now Copaken Brooks) credits the firm’s success to three eras: 1922-1954, 1954-1990, and 1990-2022.

Herman and his business partner, Mr. Kulka started the firm as Copaken Realty with just a few dollars in their pockets. The two opened an office at 1204 Commerce while being mentored by a local real estate mogul known only by his last name: Warby. Throughout this era, Herman was converting old, vacant buildings to new uses and reimagining downtown Kansas City. Near the end of this era, Herman’s daughters married Irwin Blitt and Lew White. Both joined Herman in forming the company that was later known as Copaken, White & Blitt.

After finishing college, Paul joined his brothers-in-law—Irwin and Lew—and began buying farmland in Johnson County. The brothers-in-law owned land that is now home to the intersections at I-435 and Schweitzer; I-435 and Nall; as well as the land where Oak Park Mall now sits. A portion of the land the brothers-in-law purchased was later assembled, rezoned, and sold for one of the largest corporate campus establishments in the U.S.: the Sprint Campus in Overland Park, Kansas. Copaken White & Blitt negotiated at the time to keep Sprint in the KC area.

Paul later served as Chairman of a 200-person committee that produced the “Sasaki” Report, a multi-year downtown strategic plan that resulted in $8.5 billion in development of Kansas City. During this time, Copaken, White & Blitt also developed the historic Town Pavilion and 11 enclosed shopping malls starting with St. Joseph, Missouri and Leavenworth, Kansas, then expanding to New Jersey and Long Island.

Rounding out the century

By 1990 Paul’s sons Jon and Keith had joined the firm (which also included Jerry White, Lew’s son and David Bayer, a nephew of Irwin), and one year later Bucky Brooks—now a Principal of the firm—had started his own venture as First Scout Realty Advisors. Later, the two merged to become Copaken Brooks. That brings us to Paul’s final era: the present.

The company has expanded since 1922 by adding ground up development of all kinds, property management, acquisition, corporate services, tenant representation and consulting. Bucky’s acquisition of the Dean Realty Portfolio, a 1.6 million square foot industrial and office portfolio in Downtown Kansas City has been vital in rounding out the firm as a full-service partner. After bringing Nordstrom to Oak Park Mall, Keith has been active in creating an urban, mixed-use environment in suburban areas. He leads the development of City Center, and continues to develop the two million square foot mixed-use, new-urbanism, retail, civic, office, and residential development designed to be the new downtown for Lenexa, Kansas. Jon expanded KC’s skyline, redeveloping the historic Corrigan Station and Corrigan II, an innovative second phase, developing the Crossroad’s first high-rise apartment building Arterra followed by Reverb, to name a few.

Copaken Brooks has built its legacy while building its hometown. Over 100 years, it has developed, leased, managed, and owned many properties that have become household names in the area, while still carrying on as a locally- and family-owned firm.

So, how did we get here? Love and loyalty for the Kansas City area, coupled with Herman Copaken’s original inspiration to bring new life to the skyline and to the buildings in front of us that have left their footprints on the area’s geography in meaningful ways.

Ready to take your business into a new office spac

Seeking the ideal space for your team to make thei

We are honored to welcome @Vytelle to The District 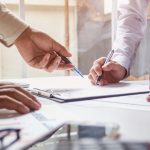 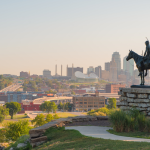