Since 1979, ULI has honored outstanding development projects in both the private and public sectors with its Global Awards for Excellence, which today is widely recognized as the development community’s most prestigious awards program. ULI Kansas City’s Developments of Distinction Awards (DODA) Program is the preeminent real estate awards program in the Kansas City metro area. The award recognizes developments that exemplify the best practices in responsible land use, economic success, and overall development solutions. Corrigan Station was one of three winners that earned this year’s ULI DODA Award.

The 10-story historic Thos. Corrigan Building was built in 1921 and was added to the list of national register of historic places in 1981. Over the past 40 years, concurrent with the decline of many downtown buildings, the building was substantially under-occupied and fell into disrepair. Now completed, the project has restored a historic and iconic building to its rightful prominence, keeping and preserving much of the building’s character and history while providing open, collaborative work spaces and high-quality amenities that modern companies desire. The neighborhood and community have enthusiastically embraced Corrigan Station for the activity and vibrancy it adds to the area.

When Kansas City-based 3D Development decided to redevelop the historic Thomas Corrigan Building – a 10-story structure built in 1921 – into office space, the company asked Copaken Brooks to partner as co-developer and property manager. Copaken Brooks worked at the macro level at the top end of development during construction. As co-developer, the team brought additional investors to the development and secured key local economic incentives from the city that helped make the project possible. 3D also leaned heavily on Copaken Brooks’ extensive experience with downtown leasing and property management. In order to qualify for state and national historic tax credits, Helix Architecture + Design and Rosin Preservation worked closely with the co-developers to develop a design that preserved the historic character of the building in accordance with National Park Service preservation guidelines.

Phase 1 of the project was completed in December 2016 with unprecedented success: The building achieved a 100-percent leased status within one year of opening and hit a record high for rent within the Central Business District of Kansas City. Corrigan also attracted both The Roasterie Café and Corvino Supper Club, serving both tenants and the general public—and driving increased foot traffic to the building and to the surrounding neighborhood. Located right on the streetcar line, these two destination eateries draw additional customers from downtown and the Crown Center areas.

The Crossroads Arts District is a unique and vibrant submarket of downtown Kansas City, known for art galleries, hip restaurants and trendy distilleries. What had been lacking in the area prior to development of Corrigan Station was a large concentration of office users and adequate parking. Most office users in the Crossroads submarket are found in older, smaller, single-story to five-story buildings. Corrigan Station not only is the tallest building in the submarket, but it provides large, 10,000-square-foot floor plates, which are rare, if not non-existent, in the area. All three of the building’s office tenants occupy more than one floor, demonstration the demand for larger spaces. Corrigan Station preserves the historic character of the building in accordance with National Park Service preservation guidelines, while still providing open, collaborative and creative workspaces that modern companies desire to build culture and attract and retain talent.

Additionally, parking in the Crossroads area is known to be nearly impossible to find, with most of the available public parking found on surface lots. The construction of a new parking garage not only provides must-have parking for the building’s tenants but also ample parking for area visitors on nights and weekends.

During the construction of the Corrigan Station garage there were many unforeseen conditions. They appeared underground in the form of previous building foundations that had to be removed. The ground then had to be stabilized to support the weight of the pre-cast parking structure. These foundations are believed to be from a previous high-rise that sat on the site. During the construction of the historic building, the project saw many aspects that needed to be upgraded. Overall, the biggest challenged was using the historical features of the building and allowing them to stay in place while redeveloping the rest of the building.

Partnership with Art in the Loop Foundation

Corrigan Station also formed a unique partnership with Art in the Loop Foundation, a multi-organization nonprofit formed to engage artists in the ongoing revitalization of downtown. Art in the Loop managed a public call-for-artists process to source a local artist to create a sculpture for the façade of the Corrigan parking garage. The selected project, The Gentle Lady, was chosen out of 23 applications and four finalists.

Congratulations to the whole development team for this achievement! 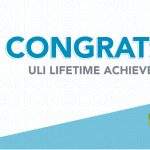