A single honorary Lifetime Achievement award is presented to a local individual whose life exemplifies ULI’s mission and who, in addition to a lifetime commitment to real estate, has given back to the Kansas City community through demonstrated civic, charitable and philanthropic endeavors. Our very own, Paul Copaken, received the 2019 Urban Land Institute of Kansas City Lifetime Achievement Award.

Paul is a long-time real estate professional and Co-Founder of Copaken, White & Blitt (now Copaken Brooks).  Copaken was active in the Kansas and Missouri real estate communities as a broker from 1959-2012.  His development experience includes: shopping centers (Oak Park Mall, Rockaway Town Square), office buildings (First National Center, Town Pavilion and Parking Structure), land assemblages (Sprint World Headquarters, Black & Veatch Headquarters, NCAA Headquarters) and much more.  One of his most proud involvements is his position as a Chairman of the Committee that produced the “Sasaki” Report,  a multi-year downtown strategic plan that resulted in $8 billion in development of Kansas City.  Much of Copaken’s work has influenced the fabric of the metro area. A life-long Kansas Citian, Copaken was a graduate of Southwest High School and went on to the Wharton School of Commerce and Finance at the University of Pennsylvania where he received a Bachelor of Science in Economics. In addition to Copaken’s impact in the real estate community, his civic involvement is equally as abundant, with participation in organizations such as: Downtown Council, Nelson-Atkins Museum of Art, Civic Council of Kansas City, Kansas City, MO City Council Downtown Hotel Committee, Anderson Ranch Arts Center (Aspen, CO), Kauffman Center for the Performing Arts, Kansas City Repertory Theatre, Youth Sports, and more.

Our company has grown exponentially since 1922, and much of that is due to the vision of Paul Copaken. We’re grateful for all he’s done for Copaken Brooks and Kansas City throughout his career. Please join us in congratulating Paul on his Lifetime Achievement Award. 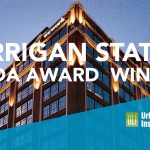