Kansas City is about to burst. With opportunities for expansion just over the horizon, we’re gearing up to help develop a new and exciting KC skyline. With over 26 million square feet of commercial office space ready to be leased, business leaders, investors and developers are watching the area closely. Let’s dive into some thrilling new developments.

Cities across the nation have experienced significant growth from sports. Look at Indianapolis – in the 60’s, the city was a “racetrack in the middle of a cornfield,” according to former Indiana University Athletic Director Fred Glass. But thanks to an ambitious plan for resurrection through sports development, the city is now home to the Indy 500, an NBA team, NFL franchise, minor league baseball team and an abundance of restaurants, businesses and entertainment options resulting in $5.6 billion in economic impact each year from 29.2 million annual visitors.

Kansas City is no stranger to the game. With teams in all five of the major professional sports leagues – Chiefs (football), Royals (baseball), Sporting KC and KC Current (soccer), the city has celebrated several major victories over the years. With significant advancement coming soon, there will be even more reason for applause.

KC is officially the FIFA World Cup 2026 host city. The World Cup is the largest single-sport event in the world. An estimated 3.4 billion people – almost half of the people on the planet – tuned in to watch the international soccer game in 2018. Host country, Russia, profited between $26 and $31 billion, adding 220,000 jobs to the workforce.

Additionally, KC is hosting the 2023 NFL draft. This event resulted in $94 million for Philadelphia, $125 million for Dallas and $133 million for Nashville in the recent past. There is also discussion of a downtown ballpark for the Royals, a lucrative enterprise that could widen the team’s fanbase and boost downtown development.

Sports tourism undoubtedly brings in dollars, but it also builds upon the image of an area, which can help attract future visitors and permanent residents. With the global sports market expected to grow from $354.96 billion in 2021 to $501.43 billion in 2022, and up to a whopping $707.84 billion in 2026, KC’s downtown visibility is geared for triumph.

The extension of the Ride KC streetcar route will benefit over 8 million annual riders. Increasing the frequency and volume of routes through the Smart Moves 3.0 plan offers more transportation choices for those living in and visiting the downtown area. With over 50% of downtown dwellers between the ages of 20-34, a younger generation’s modern mindset on sustainability could entice city commuters to take the bus.

Overhauled public transportation is expected to re-energize downtown streets. Thirty-four percent of Kansas City jobs are concentrated in the city center. This marker is promising for the corporate landscape, as it proposes premiere visibility and increased brand exposure to professionals. The bottom line? More transportation means more activity, which means more eyes on business.

Copaken Brooks has a variety of office, retail and residential properties located along the streetcar line, including Town Pavilion, Arterra, Corrigan Station I and Corrigan Station II. The growth doesn’t stop there, though. The proposed mixed-use office building Strata and residential high-rise 1818 Main are to be built along the transit line, too.

The new single terminal at Kansas City International (KCI) is set to open in March 2023. This expansion is the largest single infrastructure project in KC history. Once completed, it will feature 39 gates with the ability to accommodate future expansion of up to 50 gates.

This clears the way for massive advancement in international travel. KCI is one of the few airports that serve between 2-3 million surrounding people that does not offer transatlantic flights. Fortunately, that could change. By expanding the number of international gates from two to four, the airport is positioning itself towards an evolution. With 410 KCI passengers a day already making their way across the Atlantic after connections, international travel has the ability to flourish through KCI.

Also noteworthy – the terminal will be the first in the nation with wireless electric bus charging, another environmental milestone the city can be proud of. The electric buses will charge while passengers are loading and unloading, allowing them to run longer with minimal delays. These efficient, green features are desirable for business travelers and make it a brag worthy talking point when attempting to recruit talent to the area.

A Great Place to Expand

With all these factors coming into play, Kansas City is picking up speed to be a hub for tourism, business expansion and economic achievement. Copaken Brooks is celebrating 100 years of assisting commercial growth in the area, but our work isn’t over. These electrifying events will drive KC development to unexpected new heights. Buckle in for the ride. 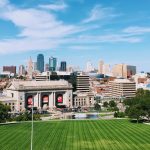